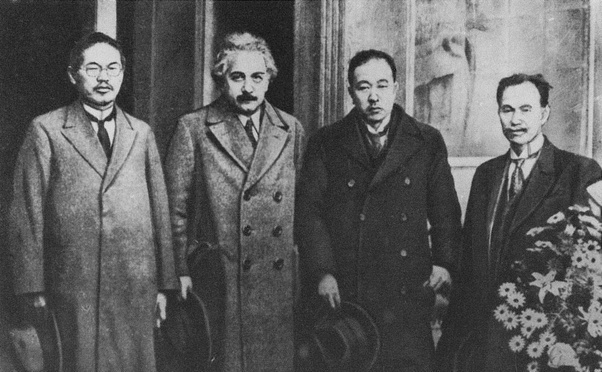 The story goes that, soon after he had settled in his quarters at the Imperial Hotel, a bellboy arrived to deliver a message to him.

It was then that one of two things happened:

Either Einstein realized that he had no small change with him to tip,

Or the bellboy refused any compensation in accordance the local custom.

So instead, Einstein scrawled two messages on the hotel stationery before handing them to the bellboy.

“If you are lucky,” he said, “the notes themselves will someday be worth more than some spare change.”

What’s relevant is not the monetary value of the notes themselves, but what was inscribed upon one of them. In a way, it’s what we could call Einstein’s “theory of happiness.”

A calm and modest life brings more happiness than the pursuit of success combined with constant restlessness.

It’s far less complex than most of Einstein’s theories, as you can see! But, if anything, it’s equally profound and meaningful.

And, while there’s no way of knowing for certain, it’s possible that Einstein was reflecting on his growing fame when he wrote this note. 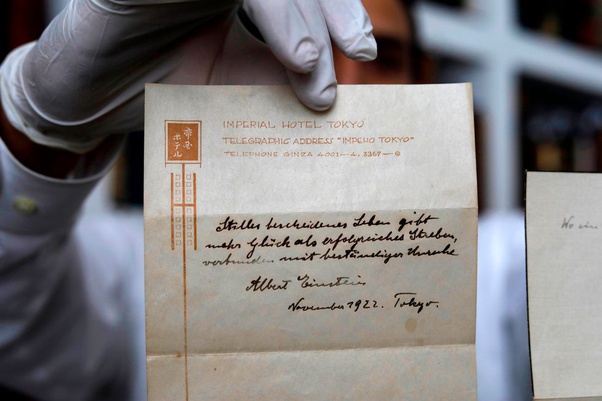 Indeed, his reputation among his scientific peers was at a peak during this time.

In fact, he had recently discovered.

That he was to be awarded the Nobel Prize in Physics

for his work on the photoelectric effect.

But it’s plausible Einstein realized that,

Despite his immense success in the development of modern physics,

Finding the true key to his happiness was a life of simplicity, just doing what he loved.

Whether or not Einstein believed what he wrote, I feel it aptly defines happiness for me.

Sometimes they are one and the same, but other times they’re very different.

We often believe that happiness lies in things like fame, money, and power.

We seek these things because we desire control in a world where, for all we know, everything is inherently meaningless.

But, at the end of the day, all we really have control over is our own lives.

And, if we truly want happiness, I believe that realizing and accepting that fact is the first step towards finding it.

Spread the word RAPED OF THEIR PENSIONS

0 Comments
BACK TO 60
Read More