Back To 60 Demand the return of their earned dues

for the meanest state pension in Europe

7 Billion Pound Robbery  under the false premise of equality and longevity.

The work and pensions select committee found them grotesquely disadvantaged in a report dated 2016.

So far, a succession of debates has yet to resolve the issue.

However, across party group is working towards reaching an agreement.

Several peer groups representing 50’s women are now coming together to form the ‘ONE VOICE’ movement.

What does this mean?

As a result of all this, thousands of women across the UK have had their retirement plans annihilated.

Their mental and physical well being has been very negatively affected.

Likewise, their family relationships have deteriorated so much so

that, as a result many have expressed the loss of their identities and self-esteem diminished.

Their sense of security has been hugely impaired along with their confidence and standing in society.

The most horrifying fact of all is that some are frequently feeling suicidal and a percentage of those are self-harming.

At the age of 60, these women expect to be retired, happy and finally able to enjoy the fruits of their labours without stress or worry.

Instead, they have been asset stripped, told to become apprentices. Essentially leaving them lonely, confused and unsure of what comes next.

Survey results, conducted by SOS Initiatives, have uncovered a catastrophic impact on thousands of women across the UK. (survey)

Millions will now have to wait longer before they can claim their state pension.

The cumulative impact of these losses, have placed them in an irrecoverable position.

In addition they have no time to plan and have been left to fend for themselves without any support.

The 1950’s women were targeted to shoulder the stealth escalation of the state pension age.

These are the women our campaign is aimed at.

Women that just happened to be born in the wrong decade, after having suffered a lifetime of inequities.

When“unfair” changes to the state pension age came to light, as mentioned above, it left all 1950’s women helpless and unsure of where to turn or what to do.

The aftermath of this government decision, lead to a small group of women coming together to demand the return of their earned dues. #Backto60 was born.

Since then we’ve continued to grow organically, taking on supernatural power.

Our popularity is self-evident in the numbers signing the petition

and on the launch of the survey, so many people were interested that it crashed our servers.

Likewise, when we crowdfunded for the documentary, we managed to hit our target and raise the funds, within two days.

Our campaign grew even stronger earlier this week.

When we gained the formal support of Michael Mansfield QC in Nexus chambers, who has agreed to represent the campaign.

We are forever thankful and overwhelmed at the amount of support we have received to date and continue to be humbled by the sheer amount of participation from others.

However, we need your help for one last push in order for us to achieve our goals. A simple task you can help us with right this instant is to head over and sign our survey.

If you’d like to join a squad of volunteers please will you immediately step forward and energise plans, now.

Peer group leaders will hold the ONE VOICE direction, whilst respecting opinions. 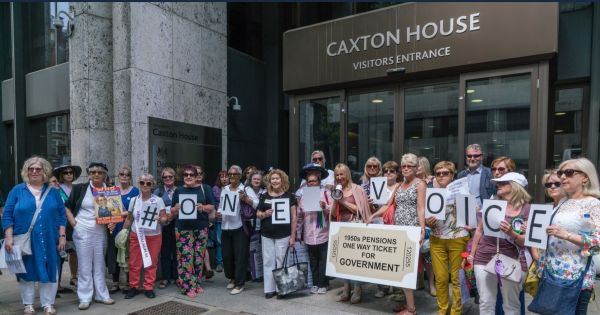 Joanne W. started this petition to
Secretary of State for Work & Pensions

The Coalition’s astounding volte face for #50sWomen #StatePension created the swiftest, steepest ‘Reforms’ for the meanest State Pension in Europe *BY STEALTH*, for 1950’s Women cohort.

#50sWomen had become “spreadsheet anomalies” – collateral damage – amidst the fallout from crash of the economy.

To do this we need your help!Back To 60

Please head over to our social media pages listed below and share news,

In addition events, as well as get involved and talk to like minded  individuals.

Become part of our herd.

Consequently  to be presented in court soon as part of an application for a judicial review of the decision.

Jackie Jones, a law professor at the University of the West England , has produced the report,  which shows that this group of women have suffered discrimination contrary to an international  convention signed by successive UK governments. It is not a legal document but it is an expert opinion.

This campaign is not only aimed at women in the 1950’s, we need to come together as “One Voice” and help support those we love.

As campaign group, Back to 60, begins a landmark High Court battle to reverse the decision to equalise men and women’s state pension age,

Stuart Price, Partner and Actuary at Quantum Advisory, looks into their chances of winning.

Stuart said: “The state pension age for women was increased to 65 earlier this year to bring it in line with men for the very first time.

While obviously frustrating for those caught in the middle, the decision was made back in 1995 during John Major’s Conservative government.

The age at which both genders can collect their pensions will further increase to 66 by October 2020 and 67 in 2026,

Also with a possible increase to 68 by 2039 to reflect the fact that people are living longer.

I certainly sympathise with women born in the 1950s who have been most affected by the changes,

As a result many of whom say they did not have time to prepare themselves for the additional wait.

They also argue they were not given sufficient information, or details they were given came too late.

Also another group that is actively fighting for women’s rights, requesting an intermediate pension arrangement

Which until they are entitled to the State Pension at 65.

Although a reasonable request on paper, in the current economic climate

Hence it is difficult to see where any funds would come from to provide those impacted with some form of recompense.

However, given the passion and determination of those involved, it will be interesting to see what happens next.”

Hats Off To Backto60

If you would like to join us, download the logo, get your hat printed and send your picture (head & shoulders close up please) to  with your first name, birth year, general location and we’ll put it on here. Join us!

More supporter images coming soon….Supporters can show this product in our website.

Open Letter to the Prime Minister

Two supporters of the BackTo60 campaign have got professional legal support to challenge the government for maladministration over the failure to notify them over the raising of the pension age.

The fresh challenge is in addition to the hearing next Friday at the High court to decide whether BackTo60 can challenge the government through a judicial review.

Pensions Litigation lawyer Mr Ivan Walker (Principal of Walkers Solicitors based in Kent) has agreed to advise Fran Martin and Ros Pain-Tolin who, are two of the lead cases of 1950s Women.

They have got to the final stage of presenting their case to the Parliamentary Ombudsman.

Mr Walker recently represented the members of the Lloyds Bank pension schemes in a landmark High Court claim regarding sex discrimination in the system for contracting out of the State Earnings-related Pension Scheme.

The move is significant because professional legal advice is essential in bringing such a case.

Also The women are launching a crowd funding appeal to help finance the move. The link is here:

The women have faced enormous and heart rending struggles to cope since the government pushed back the right to claim a pension from 60 to 65 and it is going up to 66 by 2020.

Their struggle is typical of many others who have commented on this blog and have been left with virtually nothing to live on.

Fran Martin told me : We’re letting you go. In other words, you’re fired.

This was received 2 years before my 60th birthday in 2015. I was totally shocked and still am.

with all the incumbent stresses and strains that this places on other family members.

Health has deteriorated too, with high blood pressure,

diabetes and anxiety being I feel part and parcel of the result of being misled.

At what is a vulnerable time in anyone’s life..”

Sleepless nights have become the new norm and even whilst now prescribed sleeping tablets.

I can still be wide awake at 4 or 5 am with worry for a very bleak future.

Which may not even that exists, I’m not convinced it does.”

She became redundant in 2015 and then saw her plans for a happy retirement ruined.

” I had purchased a retirement cottage in 2008 in Aberdeenshire

We’re letting you go. In other words, you’re fired.

And which DWP treated as capital

But with no work and no one coming into Aberdeen to rent, to date the cottage is still on the market.

And have costs for the upkeep of same and the flat that I live in Aberdeen.

” I am ineligible for any benefits as the DWP class the cottage as capital.

I was also forced to draw down a small private pension in 2015 at the worst possible times for annuities,

Which i use this and small savings to Seek out a bleak existence .

which quite frankly I never thought I would have to be.

And obviously places stress and worry on her too.”

I never received a letter.

Therefore, as a result they did not keep any ‘case specific’ records so cannot confirm.”

“I only have a small works pension that I had taken early.

Also a degenerative back condition which causes me pain most days and I suffer from Asthma.

” I really don’t know how I would manage at all,

If I didn’t have my husband and his Pension to rely on as well.

He is now 70 with his own health issues.

My Mother almost 95 has also given financial support over the last few years.”

Both women are determined to fight the system.

So Amber Rudd in her new role as work and pensions secretary better look out .

As a storm is gathering not only from them but from millions of other people.

Who feel they have been robbed of their state pension when they should have had it.

Byline journalists depend upon reader contributions.

If you like the article you just read, please make a pledge to the writer, so that they can keep on doing their valuable work.

Also If you have any questions about any of our journalists,

Therefore, as a result,

That is to say, in other words,

on the other hand